In February 2019 I got the latest and greatest MacBook Pro 15inch for myself. This will be my only computer which I use to develop my plugins on; AdRotate Pro and Analytics Spam Blocker and stuff like that. I also like to play a game every now and then. I watch movies, listen to my music. You know, the main computer I have to depend on for at least 1 to 2 years.

Coming from a 2015 MacBook Pro 13inch. I really like the design of the MacBook Pros and this new one is no exception. But it’s not without it’s flaws.

Over the last few years Apple, in my opinion, has been moving steadily away from ‘innovative and cool’ to ‘money-grab and elitist’. For this reason I gave up on iPhones and iPads. Never cared for gimmicks as the Apple Watch or AppleTV. And will probably never own an iPhone again with this very reason at the top of my little list of gripes.

For a bunch of months I pondered getting a Dell XPS or Asus Zenbook or something along those lines. But the main deal-breaker was always Windows and having to re-buy and re-learn all the software I like. So ultimately when it was decision time, before my ageing MacBook Pro 13inch would die, I had to decide. And ultimately went with a tricked out 15inch model.

As always, it (kinda) just works. macOS was up and running in no time. Despite my lousy internet at the time I could get my stuff updated and downloaded – Syncing Dropbox took about 2 days for 4 Gigabytes and updates took another 3 nights of downloading… But once that hassle was done, the laptop was “mine” and ready to go. 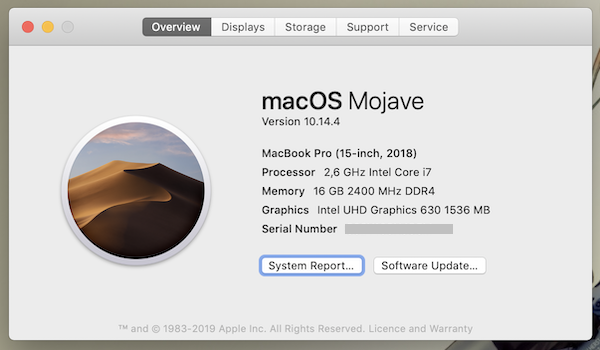 It’s fast, it’s great, it does everything I want and I like it. I got the 15inch model purely so I could have a dedicated graphics card. This one has the Radeon Pro 560X. Which apparently is a decent graphics card. Good enough for my occasional game anyway. So that’s fine.

While I like the overall look of having 4 usb-c ports. It’s clean and modern looking. I also like that all 4 ports are truly universal for pretty much anything, with the right connector. At the same time I couldn’t care less.
Having just usb-c ports also emphasises that this move is a bit too much ahead since there are virtually no accessories that can connect without some kind of adapter.
The world at large does not (yet) care enough for usb-c to not include other ports.

Not having a SD-card reader is odd. Not that I used it every day, but you know. It’s just handy to have. And there is no excuse not to have at the very least a MicroSD slot as I had on pretty much every other ‘modern’ MacBook pro I ever owned. It’s a commonly used standard that everyone on the world encounters regularly. Not being able to use it ‘just-like-that’ is weird.

My biggest issue though is the loss of the MagSafe charging. The one feature that truly made a mac cool as a laptop. Not having the think or care much about the cable being in the way or pushing on it was truly a great feature for durability. And Apple removing it is a colossally stupid and unthoughtful downgrade. There is no excuse not to have Magsafe. The laptop is thick and spacious enough to have one.

Overall I really like the looks of the MacBook Pro, I have liked it for years. It’s very timeless and basic, and I love that. Though on this latest iteration Apple dropped a ball on a few small things that I think is odd.

All seemingly minor things, but for a laptop I paid almost €3000 Euros for, not really excusable. As a comparison, the Dell XPS and Asus Zenbooks I looked at did a better job at these things (aside from the charging cable) and cost significantly less than the MacBook Pro.

I kinda like the flat design of the keyboard. The clickiness is just right I think. I always hated the gap between the keys and the laptop with light seeping through on older models. And typing on my mom her 2015 MacBook Air, the keyboard feels mushy and weird. While my previous laptop had that same keyboard, I instantly felt comfortable with this new butterfly keyboard.

I do hate the return/enter key though. I have a Dutch layout keyboard and the mechanic just doesn’t work right for the return key. I took it apart, thinking I had to re-settle the key or that something was under it and immediately noticed the flaw in the design. The key is too large for the butterfly and clicker under it. Meaning that the lower 3rd of the key simply doesn’t trigger a keystroke. So there is no way I can type with that key by just pressing on the lower part of it.
This, to me, is clearly a design flaw, and possibly only on keyboards with this shape of key. But, again, on a nearly €3000 laptop it totally sucks.

The Touch Bar – Oh that f*cking Touch Bar. I hate it. It adds nothing to my workflow and if nothing else it’s a hinderance. After trying for 2 weeks I gave up on it and reconfigured the Touch Bar to show the keys I use and want to keep within reach. All that predictive and responsive nonsense is not for me – It always showed the wrong buttons. I just want screen brightness, iTunes and volume control. That’s it. Everything else that thing does is annoying for me.

I do love the fingerprint scanner. It’s fast, effortless and works with a bunch of my apps. And with the iTunes store and stuff like that. This, for me, would be a reason to buy the laptop. Easily the best and most useful feature that got added recently.

So basically the MacBook Pro is the ‘perfect-not-so-perfect-laptop-for-prosumers’ suitable for those who want a little more oomph but don’t want to deal with Microsoft Windows just yet… I realise I could probably get a similarly specced laptop for around € 1800-2400 Euros. I looked at most of them. They all had a bunch of flaws, just like the MacBook Pro. And then considering I’d had a huge learning curve ahead and had to spend several hundred euros on software, I may as well get the MacBook Pro.

It kinda made sense, even though I don’t really agree with Apple as a brand anymore.

I’ve spent a few weeks figuring out peripherals and will probably write an article on how to deal with dongles and how you probably won’t need half of them. Yep, I have conquered the dongle debacle…

Edit: Read about how to deal with dongles and accessories on a MacBook (Pro) here.

I’ve been a mostly happy user for the last 3 months or so. And once I figure out where I’m going to live in Mexico, I’ll focus on the stupid keyboard issue and have that fixed, too. Maybe even order a few magnetic charger cables and deal with that, as well.

Even though I shouldn’t need to – Right Apple?