I’m at that point in development where an update is almost ready for release and am going over a few things to test and try to make sure everything works.

The upcoming update will have a whole bunch of improvements and some new features including better support for Borlabs Cache and the new Google Analytics tracker.

Then I came across the advertiser features, transactions and stuff like that. Which is what we’re talking about today.

Who actually uses the transactions feature?

I’m not sure. Pretty much no-one asks for it, talks about it or has questions about it. So is it just working really well? Or does nobody use it? If nobody uses it, is it really worth the development time to pursue these features any further?

The advertiser section in AdRotate Pro is there so that you as a publisher can allow your advertisers access to a small part of the plugin in the WordPress dashboard. They can then see their own adverts, get some insights in stats and performance. For the more adventurous among us you can even allow them access to edit their adverts. That’s all great and useful, but…

Less useful is, or at least that’s my feeling, the basic payment options tied in to it. Overall it’s not very user friendly or feature rich. I’m not looking to turn AdRotate Pro into a marketplace either – It’s a banner management plugin after all.

So why the question?

Feature feature creep is a serious issue in plugins and themes, or WordPress in general. And I’d like to keep things compact and barebones. Or at least focus development on more mainstream features and better UI. Even if that means removing lesser used features from time to time.

I’m seriously thinking about removing the transaction feature from AdRotate Pro. Maybe replace it with a WooCommerce module – WooCommerce is pretty much part of the WordPress ecosystem with Automattic buying it not too long ago. 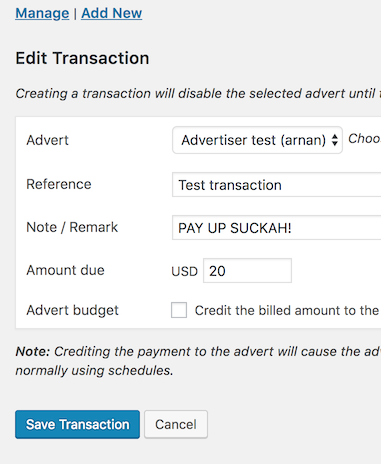 If you don’t know or care much about the advertiser features then this post is not really aimed at you. Business as usual. But of-course your opinion is welcome and important. So if you have one, let me know in the comments or via the contact form.

If you use the transactions feature, let me know as well. Just saying “I love it” or “I use it” (probably) doesn’t count. Constructive feedback is what I need here.

I know that a whole bunch of people use the advertiser options, and those are there to stay. But feedback for improvements are, as always, welcome.

This post is specifically about the transactions feature and what to do with it.
Personally I don’t care much for the payment stuff.

Let me know what you think in the comments or via the contact form. Please describe what you like or don’t like about the transactions feature and what should happen to make it more fun to use.

Thanks for your input!

1 thought on “No more transactions in AdRotate Pro?”