Managing groups is an important part of setting up AdRotate for the first time. But also over time as you add more groups or perhaps remove them.
Groups makes placing ads on your site easier and more efficient. 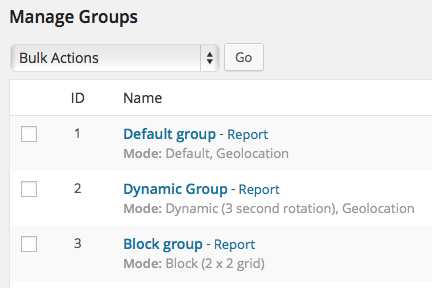 You can of course place a single advert in a page. Or in multiple pages. But what if that advert expires after a while. You’ll need to edit each and every location that advert is in and replace it with a new one. Not efficient.
Instead of putting the advert everywhere. You can also put the group everywhere. Then when adverts in that group expire you simply disable the advert (or renew it) and/or add new adverts to the group.

Groups have a name which helps you manage them. For example distinct names are useful to recognize which location they’re at or which advertiser has a campaign in them. For example; A group for the header can be named something like header 728×90. This let’s you instantly see what that group is for. Using descriptive and useful names saves you time.

Each group has a set of statistics. These are the combined statistics of the adverts currently in the group. Only clicks and impressions made through the group are shown here.

Bulk actions are actions you can perform on multiple groups at once.

Back to AdRotate Manuals

Hi, I am Arnan and I make cool plugins for WordPress, WooCommerce and bbPress.
If you’re looking for information or need help with your purchase, let me know!
Contact | Profile
Subscribe to my RSS feed!

I use the products in these banners. They’re great. If you’re looking for an upgrade. You may want to consider them, too. more »

Something wrong on this page? Found a typo or think this page can be improved? Contact me!