Another exciting update for AdRotate Pro. Just in time before I travel to the Philippines. Version 3.17 adds a bunch of all new options for schedules. Updated dashboards and some bugfixes.

This took some doing and a bunch of changes to the database. But in the end it turned out to be easier than anticipated. With these new options you can now finally finetune your advert campaigns. And it works super easy.

Editing a schedule now gives you a “advanced” section. And all non-essential options have been moved into this bit.

As you can see you can now select which days the schedule is active and between which hours on those days the advert should show up.

[/unordered_list]
And many more…

It’s easy to manage/oversee too:

The daily hours is a bit of a experiment. Let’s see how that pans out. The function works fine as far as I can tell. But it’s not very flexible for hours that carry over into the next day. I’ll try to update the filter if the option gets popular 🙂

Dashboards got a bit of an update aimed at mobile adverts. With small icons the various statuses are now indicated. So you do not have to ‘waste’ precious title space to differentiate between mobile, tablet or desktop adverts. These icons are visible in all advert listings where it’s relevant to know what kind of advert it is.

Keeping your titles clean is important for management, but also for Google Analytics and Piwik stats so the events created are more easy to interpret.

Using Adblock Disguise you can try to avoid adblockers from being effective. This article explains how to best use this feature and how you can make smarter adverts so they’re less likely to be blocked.

Adblockers work very simple. They look for patterns and keywords. If they spot something that someone has listed as an advert it will hide that element from the viewer.

If should be obvious that your advert should not look like an advert. If you use a image in your advert called cocacola-320×200.jpg, that’s just asking for it to be blocked. Removing the -320×200 bit will increase the chances of your advert being shown.

A common issue is that even if you’re smart about making your adverts, themes offering advertising spots often label these zones as advertising areas. Dumb names like Header advert are all too common.

Because of the uniform way AdRotate works, the same is true for AdRotate to some extent. AdRotate (Pro) tries to use ‘generic’ code wherever possible to avoid adblockers doing their thing. But that’s no longer enough. Hence Adblock Disguise.

The Text Widgets option (Blue arrow) may be required for themes that do not allow shortcodes in the WordPress Text Widget.

With widgets there is always the word adrotate attached to your advert. This increases the chance of your advert being blocked greatly.

If at all possible you should use the WordPress text widget and in that use an AdRotate shortcode. This increases your adverts chances of being shown.

For more information on how to use shortcodes, check out the shortcode manual.

Don’t be a dick

The sole reason adblockers exist is because some people believe that they should have more adverts than content. Others think that blinking, expanding adverts are the way forward. And yet even more annoyingly – Some deem adverts with audio acceptable.

Don’t be a dick and be reasonable with your advertisements. Place them in smart places where they are not obnoxious. Don’t place too many adverts on your site, either.

Use advertisements in a sensible way!

While AdRotate Pro keeps on trying to avoid adblockers it’s very much a cat and mouse game. These features, methods and such are not guaranteed to work. Your own code and settings, adverts and even the rest of your website will influence the effectiveness of these features.

Updates, updates! Several bugfixes, some improvements and and tweaks. Dashboards are now more uniform and consistent. Code validation for javascript/html5/flash adverts has been improved and a bunch of under-the-hood improvements have been made.

A quick small update to fix a intermediate bug introduced in 3.16. Aparently get_home_path() doesn’t work for everyone. Luckily ABSPATH does 🙂
I’ve also finally found a quick way to duplicate adverts, huzzah! Turns out it wasn’t all that hard if you add the feature in the right spot.

The way it works is that you create your advert(s). Then select which ones you want to duplicate. This can be one or many and use bulk actions to do so. 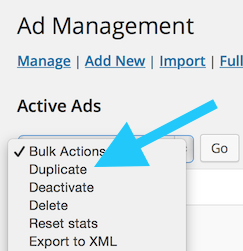 It’s been a busy few weeks and a number of improvements have been made. A bunch of bugs have been fixed and a few new features. Statistics (Using the internal tracker) has a few new tricks up it’s sleeve and can now also show this and last months totals for adverts.

A new and exciting feature called ‘Adblock Disguise’ has been added to AdRotate Pro. Using Adblock Disguise you can mask the CSS and Javascript Output from AdRotate so that adblockers can not easily cut out your adverts.

Adblockers work by looking for common phrases, a few of which include the CSS and Javascript from AdRotate. You can now dynamically change these from AdRotate Settings to trick the adblockers. Obviously if your advert uses other code or terms that are easily spotted this feature will have little effect. So be mindful of what you do.

The Mobile feature has had a bit of an overhaul and now uses the PHP Library ‘Mobile Detect’ to determine what’s what. This allows for a bit more control.
You’ll see that adverts that are set to be mobile only now can differentiate between Phones and Tablets. Check your advert settings to see how this works.

The Responsive feature is proving exceedingly difficult to set up and maintain. This feature will no longer see much updates and may eventually be removed from AdRotate (Pro) again. For the time being, the Mobile Feature is the way forward.

At the end of the month I’ll be travelling to the Philippines. Probably with dodgy internet until I arrive at my destination on Mindoro in early October. 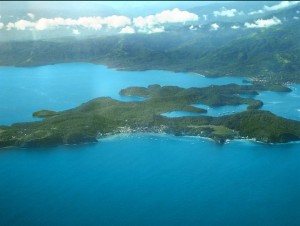 This means that between September 28th and October 5th I may not respond to email, forum posts, chat or tweets. If at all possible I will try to answer emails and possibly forum posts every few days. But I’m not sure if I’ll be able to.

A small update fixing 2 things that may break the output of groups in AdRotate – Most notably groups on block mode.

The width of groups was not applied correctly. Not every theme knows how to handle this and as a result may show a while area. This is now fixed with correct CSS for the width. Additionally, the %title% tag wasn’t converted as it should. Causing some warnings/notices for a few people.

Small update, no new plugin support. Some descriptions updated. Added a caution for the ‘wp125’ plugin which is mostly defunct these days. This may affect imports. The version recommendation for AdRotate (pro) is now a requirement – Check the changelog included with the download for details.

A number of fixes, improvements and a overhaul of the settings pages. Most things aimed at WordPress 4.3 compatibility but also general usability and stability of the plugin.

Some users saw both mobile and desktop adverts appear for desktop users. This in itself isn’t that bad, but would affect impressions for both platforms a bit. This has now been fixed and because of how things are handled now may work a bit faster too on larger sites 🙂

For some users too many lookups were used for Geo Services. This has now been fixed.
In certain combinations of settings a lookup may be performed even if Geo Targeting was disabled. None of that anymore 🙂

A bit overdue, but here is AdRotate Pro version 3.14 bringing you a few new goodies and some fixes. Advert editing just got better, Geo Targeting got a bit of a update and the settings page got overhauled.

AdRotate Pro now has a fancy live preview. Type something valid in the AdCode field and you’ll see it immediately below the textarea without having to save the advert first.
Of-course to make the changes permanent you still need to save things 🙂

Geo Targeting has had a little update – You can not select regions such as east or west Europe to target a whole bunch of countries at once. This is sort of a shortcut to select sets of countries. After you’ve saved the region, all relevant countries will be stored for you.